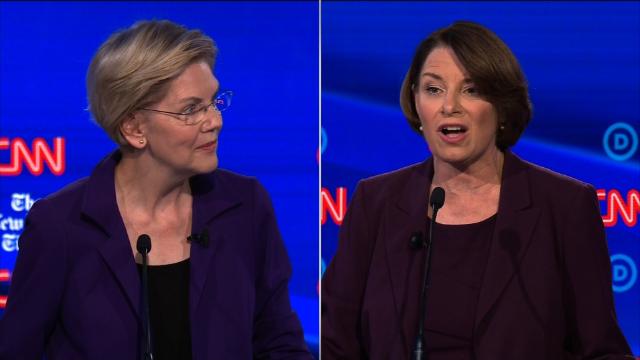 Sen. Elizabeth Warren has been surging in the polls and she’s paying the price in the debate. She’s become the relentless target of attacks tonight, and has already suffered lasting wounds from the onslaught.

Warren’s position may play well with Democratic activists, who usually dominate in primary elections. But this year is different, since Democratic voters want someone who can readily beat President Donald Trump. When more moderate candidates came out on the offensive, Warren’s positions looked further left.

Warren refused to answer “yes or no” on repeated questions about whether her Medicare for All plan would raise taxes on the middle class. She dodged the question, saying it would “lower costs.” It fooled no one, and it was not a good look. Mayor Pete Buttigieg called her out, “You heard it tonight: a yes or no question that didn’t get a yes or no answer.”

Sen. Amy Klobuchar hit again. “I appreciate Elizabeth’s work,” she said. “But again, the difference between a plan and a pipe dream is something that you can actually get done.”

The problem with Warren’s plan is not just that it would raise taxes or that it would be hard to implement, but that most Americans do not want it. Polls show two-thirds of Americans want a national health care plan, but less than one third want it to replace their private health insurance.

It has not been a good night for Warren, even if she was all but crowned the frontrunner given the attacks from other candidates.

Frida Ghitis, a former CNN producer and correspondent, is a world affairs columnist. She is a frequent opinion contributor to CNN, a contributing columnist to the Washington Post and a columnist for World Politics Review. Follow her on Twitter @fridaghitis. The opinions expressed in this commentary are those of the author. Read more opinion on CNN.