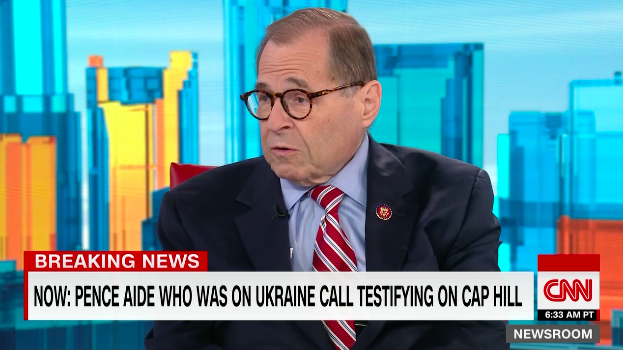 House Judiciary Chairman Jerry Nadler, a Democrat from New York, appeared on CNN this morning to give an update on the House’s impeachment inquiry.

Asked if Democrats have started drafting articles of impeachment, Nadler said, “No, we have not.”

“In the Judiciary Committee we’ll have full due process for the President and that means that if there’s any exculpatory evidence, evidence showing he’s innocent, whether it’s witnesses or anything else, they’ll be able to bring it forward.”

Asked if he’s personally seen enough evidence that Trump has committed high crimes and misdemeanors, Nadler responded, “I’ve seen a lot of evidence of that, but maybe there will be evidence contradicting that … I have to have an open mind but certainly a very heavy case against him at the moment.”

Nadler would not comment on his committee’s plans to call or not call additional witnesses in the inquiry. He pointed out that first the House Intelligence Committee will write a report on the investigation and present it to the judiciary. Nadler said that based on that report his committee will decide “which witnesses, if any, we want to call.”

On the efforts by the White House to block the testimony of witnesses — instructing officials within the administration not to comply with the subpoenas compelling them to testify — Nadler said that it’s “wrong for White House to do that” and “contradicts law to defy subpoenas.”

Asked in a follow up question if he felt that what the White House is doing by blocking witnesses is illegal, Nadler said, “Yeah, I do.”

On whether he would you vote for impeachment today, Nadler said he wouldn’t answer the question” because I do have to keep an open mind and an appearance of an open mind.”

He added: “I have said that the evidence is pretty damning.”