The student walked onto the quad, pulled a handgun out of his backpack and shot five other students before turning the gun on himself, Capt. Kent Wegener of the Los Angeles County Sheriff’s Department said.

The shooter was in “grave condition” and being treated at a local hospital, Sheriff Alexander Villanueva said. Thursday was his birthday. There were no additional rounds of ammunition in his gun when it was recovered.

A 16-year-old female student and 14-year-old male student died after being transported to a nearby hospital, the sheriff said. The three surviving victims were in stable condition, according to the sheriff’s office, and one has been released.

Sheriff Villanueva declined to elaborate on the suspect’s motivations but said authorities didn’t believe he worked with anyone else. The suspect used a .45 caliber semiautomatic handgun, Capt. Wegener said. 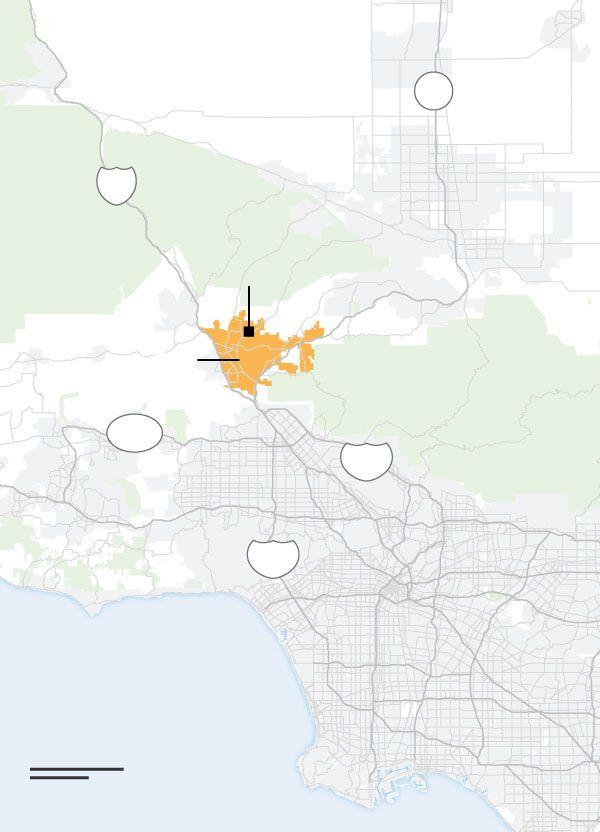 The suspect is Nathaniel Berhow, a law-enforcement official said. He is a junior at the school, according to records, which show him on the school track team. His father died in 2017, according to an online obituary, and his parents previously had a legal dispute over custody.

Investigators are searching for evidence of the alleged shooter’s motive at his home, Capt. Wegener said. His girlfriend and mother met with detectives in Santa Clarita on Thursday. The suspect posted a message on social media Wednesday that said, “Saugus have fun at school tomorrow,” according to Capt. Wegener.

The shooting began around 7:35 a.m., while many of Saugus High’s approximately 2,500 students were in first-period classes, witnesses said.

At 7:38 a.m., the sheriff’s office began receiving calls from parents who were getting text messages from their children at the school, officials said.

Three off-duty officers who were dropping students off at Saugus High were on the scene within seconds, according to the sheriff, and on-duty officers arrived in two minutes. They found six people with gunshot wounds in the quad area.

Gerardo Alvarez was with friends in the school’s quad when the group heard a pop. After the second and third gunshots, they ran and took refuge in an interior hallway.

“I just saw a figure with a gun,” said Gerardo, a 15-year-old sophomore.

Some students didn’t initially realize what the gunshot sounds were.

“At first, I didn’t make anything of it, there’s always loud noises,” said Jason Treannor, a 17-year-old junior. “What got me was when I saw the whole of Saugus High School running toward me.”

He ended up taking refuge with about 30 others in the school’s windowless music library.

The school’s football team was meeting at the time of the shooting and hid in the coach’s classroom, said 16-year-old Tanner Shanks, an outside linebacker.

Ben Lewis, a 17-year-old senior, was taking a quiz in his economics class when he heard people screaming and running.

At least two students were killed and several wounded after a 16-year-old opened fire Thursday morning at a high school in Santa Clarita, Calif.

Emerson Cabigting embraced his daughter, Ella, as they reunited following the shooting at Saugus High School in Santa Clarita, Calif.

Emerson Cabigting embraced his daughter, Ella, as they reunited following the shooting at Saugus High School in Santa Clarita, Calif.

He and classmates quickly barricaded the room, he said, pushing desks against the door.

His brother, 15-year-old Matt, was at home when he got a text from his girlfriend at 7:38 a.m. telling him about the shooting.

The boys’ mother, Sherrie Lewis, said she frantically texted Ben when she heard. He was able to confirm his safety but said he couldn’t talk because students were instructed to stay silent.

Andy Anderson, 70, lives across the street from the alleged shooter on a sun-baked block of well-kept and mostly one-story homes, where palm and fig trees line the yards. He said he hardly ever spoke to the family, who had lived there for about 20 years.

“We’re a typical California neighborhood. I see you. I wave to you, but I don’t know anything about you,” Mr. Anderson said.